The Meaning Behind the Symbol

Pioneers defined the City’s heritage and continue to define its future. Thus, the conquistador’s helmet on the City’s seal symbolizes not only the Spanish explorers in the 18th century, but also settlers from other parts of the U.S. and the world in the 19th century and technology visionaries in the 20th and 21st century.

The Spanish helmet, called a morion, on the seal was inspired by a 22-foot-tall sculpture at City Hall that was created by artist John Augsberger and dedicated in 1971. Here is the interesting tale of that sculpture, excerpted from “The Story of a Sculpture,” by Gail Fretwell-Hugger and Donna Austin of the Cupertino Historical Society, published in The Cupertino Scene, February 2017.

The Story of a Sculpture

At the corner of Torre and Ro­drigues avenues stands a 20-foot-tall silent sentry to Cupertino’s past. Schoolchildren and their parents walk by the sculpture every day on the way to class, while bicyclists and drivers pass by on their way to work, City Hall, or the library. Some don’t notice the large rust-fin­ished helmet as they go about their daily routines, especially during the fall when it blends in seamlessly with the red- and orange-colored leaves of the trees that surround it. But those who do look up usually have the same question: What is that?

The sculpture is a stylized version of a morion (pronounced mohr-ee-on) which is a Spanish conquistador’s helmet. And it’s been Cupertino’s symbol since the 1970s. 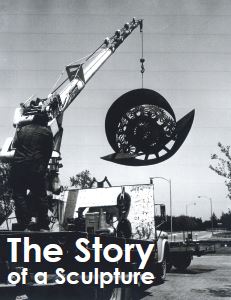 Why a Spanish Helmet?
The area now known as Cupertino was claimed by the Spanish in 1776 by explorer Juan Bautista de Anza. That name is familiar to every Cuper­tino resident who uses De Anza Bou­levard, which cuts through the heart of the City between Prospect Road to the south and Homestead Road to the north.

Fast forward 200 years when the City Council in the 1970s had a decision to make on artwork for an upgraded Civic Plaza.

According to local history, the Coun­cil had to select either the morion sculpture—at a cost of approximate­ly $10,000—or a statue of Juan Bautis­ta de Anza on a horse for an amount anywhere from $50,000 to $100,000.

The Council decided to be prudent with the taxpayers’ dollars and went with the cheaper option. Thus, the morion became the City of Cuperti­no’s official symbol.

Interestingly, it’s believed that de Anza himself never wore a morion. Instead, he most likely wore a plain, black, wide-brimmed hat, which was more comfortable to wear and helped protect his face and neck from the elements as he trail blazed through California.

The Life of the Morion
The morion sculpture was purchased by the City in 1971 and placed on a three-legged base in the Civic Cen­ter Plaza, where it sat for over a de­cade.

One year later the sculpture was relo­cated to the side of the old Cuperti­no Library on Torre Avenue.

When the building was demolished to make way for a new library and com­munity hall, the sculpture was dis­mantled, refurbished, and then finally moved to the corner of Torre and Ro­drigues avenues when the new Civic Center was completed in 2004.