Wine was big business in Cupertino throughout the 19th century. The growing of wine grapes and the making of wine dominated the town’s economy. That heritage continues today on Montebello Ridge, which is home to historic wineries, such as Picchetti Brothers Winery and Ridge Vineyards, as well as more recently established vineyards, such as Fellom Ranch Vineyards, Naumann Vineyards and R&W Vineyards. 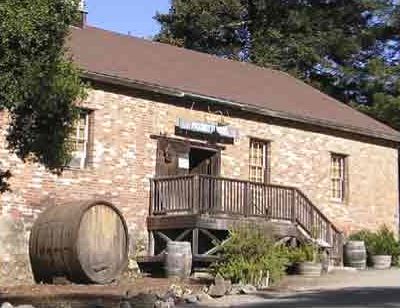 Before Cupertino was really a town - when it had a blacksmith shop and a general store at the Crossroads and very little else - immigrants from France, Germany, Italy and even overland from east of the Rocky Mountains came to California, not to search for gold, but to buy and settle and work the land. Land was gold.

Early Vineyards and a Blackberry Patch
The earliest vineyard in the Westside (Cupertino) was planted by one of the area's first settlers, Captain Elisha Stephens - hunter, trapper, explorer and wagon master. After successfully guiding the Stephens-Murphy-Townsend party over the plains and high Sierras, Stephens settled along the creek that now bears his name and planted a small vineyard and a blackberry patch that became Blackberry Farm swim resort in much later years.

In 1870, after Stephens had left the area for Bakersfield, the Jesuit priests of Santa Clara College bought 320 acres on a plateau above the creek (in the Stevens Creeks Dam area) and called it Villa Maria. They envisioned the land a summer retreat for the priests from Santa Clara University and planted a vineyard of sacramental wines for the church and commercial wines to provide revenues for the college.

Vineyards in Cupertino’s Flatlands
Even before the Jesuits planted their vineyard, a German farmer, Henry Farr, bought 240 acres around 1868 at the intersection of Prospect and Stelling roads. Farr called his ranch Grandview as it had a panoramic view of the Santa Clara Valley. He planted grapes for Cabernet, Matero, Burger, Zinfandel and Reisling wines. In 1910, Henry sold his last piece of land to Painless Parker, a San Francisco dentist with unorthodox marketing methods (present site - Parker Ranch Road).

One of the Westside's most successful early wineries was owned by John T. Doyle (1814 - 1906), chief counsel to the archdiocese of San Francisco. He had a beautiful mansion in Menlo Park but wanted a country estate as well. His property extended from Foothill Boulevard to Orange Avenue in Monta Vista and from Stevens Creek Boulevard to McClellan Road. He built two very large winery buildings (Cupertino Winery and Las Palmas) plus a large home, many outbuildings including a Chinese hotel for workers, and another building he called the Palace Hotel. He had a dairy, large poultry yards, huge four-story water tanks, and an elevated glass-lined, ¼-mile-long pipe to transport the wine from his eastern winery to his western winery, across the same arroyo that De Anza and his soldiers had traversed some 160 years before. Doyle had the first post office on his property and used the name Cupertino, which replaced the name of Westside. His wines were sold on the East Coast and in Europe and took second place in the 1904 Chicago World's Fair. He dammed up sections of Stevens Creek for water to process his grapes into wine, with pumping stations all along the creek. His water system was the basis for Cupertino's Municipal Water System in the later 1900s. The 1906 San Francisco earthquake damaged his extensive buildings, and Doyle died later that year. His former summer home remained on McClellan Road until the 1960s while different Cupertino city councils debated about preserving the buildings along with the property as a large park. Eventually, the land on which the wineries and house stood on McClellan Road was sold to developers and the massive wine buildings and lovely old home disappeared.

Cupertino's first millionaire, Charles Baldwin had the Millefleurs Winery on what is now De Anza College. He produced Cabernet Sauvignon and Cabernet Merlot. His wines were exported to New York, London and Central America where they competed successfully with French wines.

Several other early Cupertinians who had vineyards and wineries were Alex Montgomery (brandy distillery and kosher wines), and Thomas Duncan Benrimo, who had 56 acres on what is now Target and the parking lot. Three ship captains - William Porter, Joseph Merithew and Daniel Henry Blake  -  established vineyards in the flatlands of Cupertino after their sea voyages. Other family vineyards were owned by John H.  Snyder, W.T. McClellan, Jose Ramon Arguello, George McCauley, J.B.J. Portal and Enoch Parrish.

Montebello Ridge Vineyards
The Italians and the French took to the rugged slopes of Montebello Ridge. There, the Picchetti family built one of earliest wineries in California. The vineyards produced Zinfandels, Garignane, Petite Syrahs for red wine, and Columbard and Golden Shasta for white wines. Also on the Ridge, but extending into Saratoga, was H.V. Garrod's property. Both Picchetti and Garrod wineries still make and bottle their own wines under their own names.

Farther up on Montebello was Pierre Klein from France who produced wines for his restaurant in San Francisco - Claret X and the Grand Vin (also known as the Chateau Lafitte of America). Klein entered his wines at Bordeaux, France, in 1895 and next in Brussels, where he won the highest award given, a gold medal with an effigy of Leopold II and a gold and white cross. Klein became an international celebrity for his wines. In Paris he won two more gold medals, which lent his wines even more prestige. In 1907, Klein gave his wife, Victorine, 160 acres of the land on Montebello Ridge. In 1913, Victorine and Pierre sold the entire 160 acres along with crops and buildings to John M. Williams for $10. It can only be speculated as to why Klein sold his land for such a paltry sum. The Kleins moved to Mountain View. In 1920 Victorine died suddenly after an operation to save her life. Two years later, Pierre died of a self-inflicted gunshot wound.

John Gemello, a former caretaker of Paul Masson's Evergreen Vineyards, had a winery on Montebello in 1915. Some of the other vintners on the Ridge were the Torres, the Sylvester Panighettis, the Joseph Gautiers and Charlie Rousten - who swore that Prohibition and revenue agents were more responsible for the demise of small family wineries than competition from the large corporate wineries.

At the very top of the Ridge was Osea Perrone's winery. Perrone was a doctor in San Francisco who had a stone wine cellar built into the side of one of the hills, for aging his wine. He would sometimes bring his patients from S.F. to the mountain ridge to rest and recuperate. From his home and winery on the very top of the Ridge, he often drove his buggy west toward the Pacific Ocean on rugged mountain trails to San Francisco. On one such journey his buggy overturned, and he suffered a leg injury that led to his death. Perrone's winery is now Ridge Winery and noted for its robust Zinfandels, among other wines produced.

New Beginnings
The root louse phylloxera decimated vineyards worldwide between 1895 and 1905. Many wineries went out of business all over the world. If vintners could afford to replant, they did; though some pulled out their vines and planted orchards by the mile, leading to Santa Clara Valley's appellation, "The Valley of Heart's Delight."

Now, over 100 years later, small boutique wineries abound again in the hills of the valley, stretching to Santa Cruz and along the summit roads and foothills to San Francisco.