Continuing a Legacy of Pioneering

Cupertino owes its earliest mention in recorded history to Spaniards with a pioneering spirit. In 1776, Captain Juan Bautista de Anza led an expedition from Sonora, Mexico, up the coast of California, aiming to establish a presidio (fort) on San Francisco Bay. Leaving most of his party in Monterey to rest, De Anza continued north with Pedro Font, a Franciscan priest, diarist and cartographer, and 18 other men. As they passed through the Santa Clara Valley, Font bestowed the name Arroyo San Jose de Cupertino on the stream that now is called Stevens Creek.

Spanish colonization of the Tamyen (or Thamien) Native Americans, a division of the Ohlone who lived throughout the valley, soon followed with the founding of Mission Santa Clara de Thamien in 1777. Spanish rule ended in 1821 when California became a province of an independent Mexico. The Mexican-American War made California a territory of the United States in 1848 and a state in 1850.

The Town Gets a Name

Over time, a settlement called West Side sprang up at the Crossroads of Saratoga-Sunnyvale Road (now De Anza Boulevard) and Stevens Creek Road (now a boulevard). 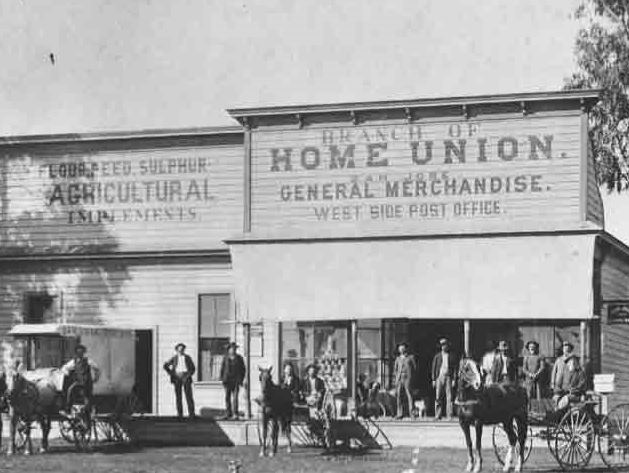 When the post office needed a new name because other towns had the same name, 19th century business and 18th century Spanish influences merged. John T. Doyle, a San Francisco lawyer and historian, had founded his company, the Cupertino Wine Co., in the 1880s, using the name given the nearby creek by Pedro Font. In 1904, the Cupertino name was applied to the Crossroads, the post office and the Home Union Store, which incorporated as The Cupertino Store and moved to the northeast corner of the Crossroads.

Many of Cupertino's pioneer settlers planted grapes in the late 1800s. Vineyards and wineries proliferated on Montebello Ridge, the lower foothills and the flat lands below. Around 1895, phylloxera (a root louse) struck the thriving wine industry. It virtually destroyed 75% of the vineyards in five years. A few resorted to grafting, while many others switched to French prunes (a type of plum that dries without spoiling), peaches, apricots, cherries, plums, walnuts and almonds.

As these orchards and others in nearby communities flourished, the Santa Clara Valley became known for the spring profusion of blossoms. Many people passed through the Cupertino area first by electric railway and later by car to view the spectacular blossoms in the "Valley of Heart's Delight." The electric railway led to the development of the Monta Vista area, and Monta Vista was the name of the first housing tract in Cupertino.

A major milestone in Cupertino's development came in the early 1960s with the creation of VALLCO Business and Industrial Park by some of the city's largest landowners. Of the 25 property owners impacted, 17 pooled their land to form VALLCO Park, six sold to Varian Associates, a thriving electronic firm founded by Russell Varian, and two opted for transplanting to farms elsewhere. The name VALLCO was derived from the names of the principal developers: Varian Associates and the Leonard, Lester, Craft and Orlando families. Originally a business park, VALLCO later evolved into a retail shopping center.

Even with VALLCO, Cupertino remained largely a town of ranches and estate vineyards until the mid-1960s. Then two things happened: De Anza College opened in 1967, and soon after, computers came on the scene. Named for the Spanish explorer whose cartographer named the creek from which the city eventually took its name, De Anza College occupies a 112-acre site that was the location of the Beaulieu winery built at the turn of the 20th century by Charles and Ella Baldwin. Their mansion has become the California History Center. With more than 20,000 students, as well as its popular Flint Center and Minolta Planetarium, De Anza College has become a hub of activity in the city, which has no real downtown.

By the 1970s, Cupertino and the other communities that made up the Valley of Hearts Delight had emerged as Silicon Valley Apple Computer Inc. (now Apple Inc.) arrived in Cupertino in 1977. In its 40th year in Cupertino, the company is opening its stunning Apple Park campus on Pruneridge Avenue not far from where co-founder Steve Jobs attended Homestead High School. Part of the Apple Park site formerly was a major satellite campus for Hewlett-Packard. Over the decades, numerous high-tech companies, such as Portal Software, NetManage Inc. and Symantec, started up or furthered their success in Cupertino.

Cupertino's growth obliterated not only the original names but also many of the old landmarks, replacing them with a proliferation of shopping centers. The retail center now called the Crossroads District occupies the place where the city's first post office, blacksmith shop and general store once stood, replacing them with chain stores and restaurants.

Today, most nightlife is over the border in San Jose -- which had begun to spread tentacles across the valley in the postwar years. Fear of annexation caused Cupertino to incorporate in 1955, and the population has since has grown tenfold to more than 60,000. Cupertino was motivated to set its original boundaries by residents who were concerned that nearby cities' attempts to incorporate the area would submerge the community's distinctive qualities and diminish home rule. In this way, "community character" has been an integral aspect of Cupertino since it was established.

Today, the private sector in Cupertino is dominated by high-tech companies and numerous small businesses. The City serves as a center for research and development, with virtually no manufacturing taking place in the City, because land and living costs are too high. Businesses indicate that their companies enjoy a competitive advantage by having facilities in Cupertino. This is because highly skilled, sought-after employees prefer working and living in the Cupertino area, with its moderate size and unique, balanced mix of high technology firms, retail center, open space, quality schools and residential areas.

As it has since its beginnings, Cupertino continues to attract pioneers from multiple cultures, as it adapts to each new era.

The Cupertino Historical Society and Museum keeps the City’s past and present heritage alive with information and artifacts that span settlement, agriculture, education, home life and business. Museum hours are Wednesday through Saturday, 10 a.m. to 4 p.m., depending on volunteer availability. Call first to make sure the museum is open. Get more info and see historic photos on the organization’s Facebook page.