Apple Inc. is proposing to replace and redevelop an office, research and development campus, Apple Campus 2, at an approximately 176-acre site in Cupertino. The proposed site is located in the area bounded by Homestead Road, N. Wolfe Road, I-280 & N. Tantau Avenue and properties located on the east side of N. Tantau Avenue.

The California Environmental Quality Act (CEQA) requires environmental review of the project prior to the lead agency making a decision on the project. For the Apple Campus 2 project, the City of Cupertino is the “lead agency” as defined by CEQA. Originally enacted in 1970, CEQA is the foundation of environmental law and policy in California. The basic goal of CEQA is to develop and maintain a high-quality environment now and in the future.

The specific goal of CEQA is: 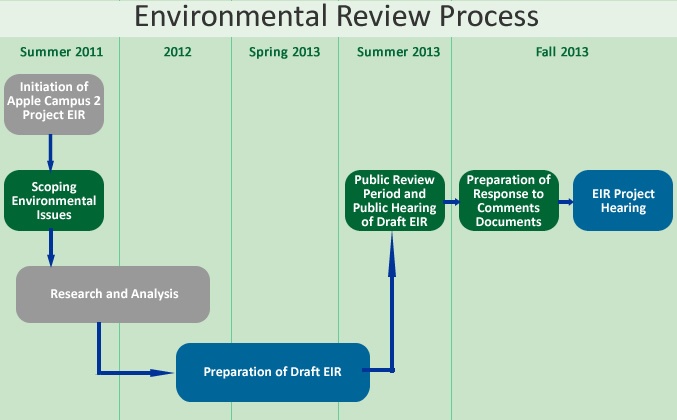 A Draft Environmental Impact Report (DEIR) has been prepared for the Apple Campus 2 project which is now available for review.

Based on comments received during the public comment period, the DEIR may be revised as necessary. In addition, responses to all comments on environmental issues will be provided in the Final Environmental Impact Report (FEIR) which is expected to be published in late Fall 2013.

CEQA requires that the FEIR, once published, be circulated for 10 days. This will be available on the City’s website for review. Following the review period, the Environmental Review Committee and the Planning Commission will make a recommendation to the City Council on the FEIR. The City Council will consider the Commission’s recommendation when making its decision on the project.