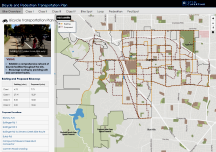 In June 2016, the Cupertino City Council adopted the 2016 Bicycle Transportation Plan. The Plan identifies a prioritized list of projects that support and promote bicycling in Cupertino. It includes facilities like separated bikeways, bike boulevards, and The Loop, a bicycle route encircling Cupertino (described below).

The Transportation Division has prioritized the following projects for implementation:

The Carmen Road Pedestrian/Bicycle Bridge will provide a safe connection for pedestrians and bicyclists between neighborhoods separated by Stevens Creek Blvd between Foothill Blvd and Phar Lap Dr.

The Loop is a concept envisioned in the 2016 Bicycle Transportation Plan that consists of several off-street trail segments, that when combined with on-street connections would form a bicycle loop around Cupertino.

The following active projects form part of The Loop:

The Junipero Serra Trail will provide an off-street bicycle and pedestrian connection between the Don Burnett Bicycle-Pedestrian Bridge and Calabazas Creek, along the existing Junipero Serra Channel (south of Interstate 280).

The Linda Vista Trail project is a proposal to open an old access road between McClellan Road and Linda Vista Park, along the eastern edge of Deep Cliff Golf Course.

To receive updates on the implementation of these projects, please sign up for e-notification on the right hand side of this page.