The Junipero Serra Trail is one of the trail segments that would make up “The Loop”.  It will provide an off-street bicycle and pedestrian facility that runs parallel to the existing Junipero Serra Channel and Calabazas Creek and provide a connection between the Don Burnett Bicycle-Pedestrian Bridge and Vallco Parkway.

One of the recommended prioritized projects in the 2016 Bicycle Transportation Plan is to conduct a feasibility study for the Junipero Serra Trail.  In August 2017, City staff retained Callander Associates Landscape Architecture to lead this effort and deliver a feasibility study report for the proposed trail extents.  The project team also included Fehr & Peers to assist with at-grade trail crossing analysis, and Sandis to assist with storm drain analysis and utility mapping. 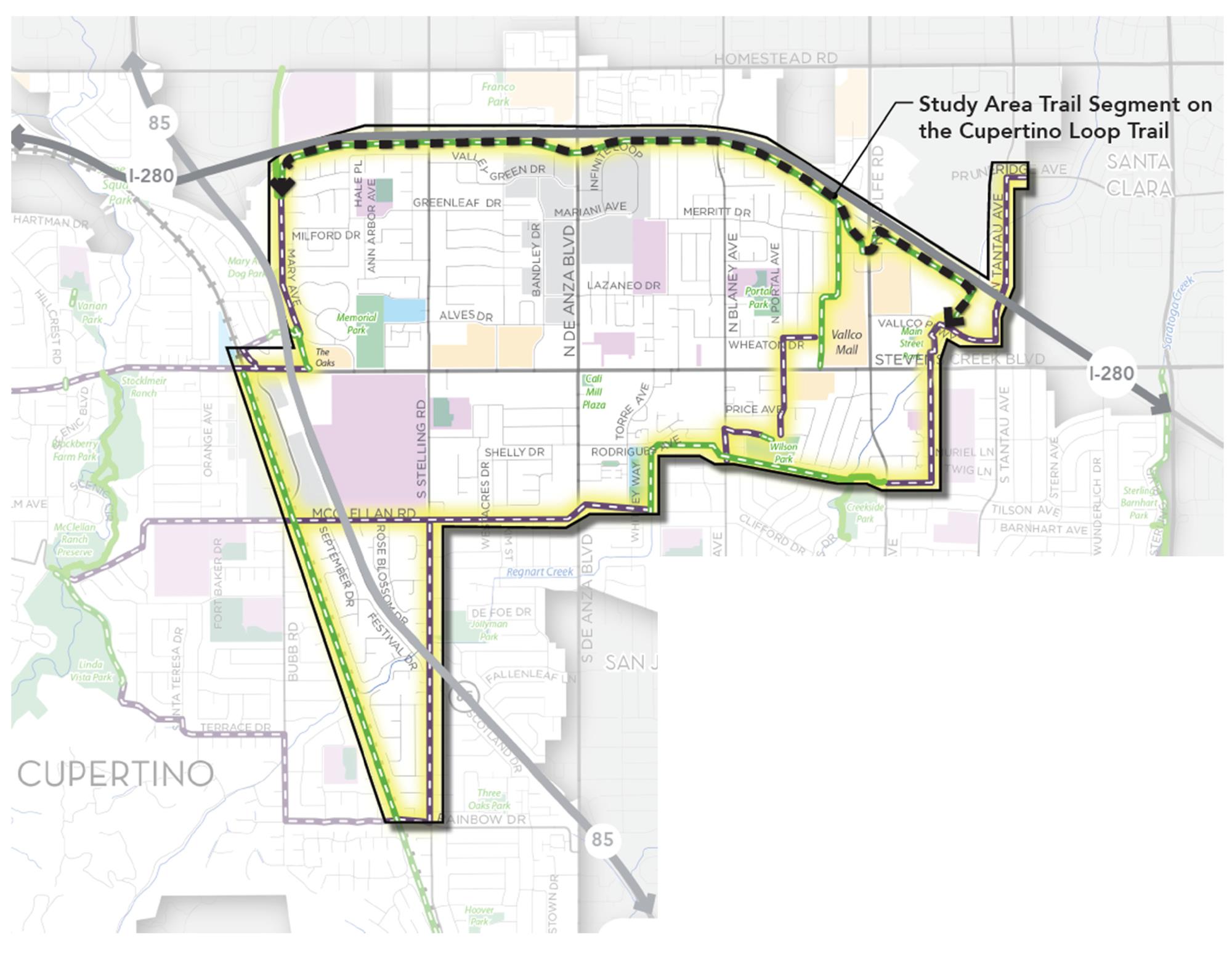 The first public meeting (Meeting #1) was held on December 6, 2017 to introduce the project to the community and to present the trail's existing conditions.  Approximately 30 people signed into the event, all of whom were invited to provide feedback to City staff and project consultants during the event through one-on-one discussions and by submitting written comments on the input packets, flip charts, and trail segment plots that were distributed and displayed at the event.

The City hosted two separate public meetings on the evenings of February 20, 2018 (Meeting #2a) and February 26, 2018 (Meeting #2b) to present conceptual plans of the proposed trail and to solicit community feedback.  The conceptual plans were developed based on analysis of the existing conditions and comments received at Meeting #1.  The plans also identified design alternatives addressing constraints related to trail width, trail access, and trail crossings at several major streets.  A total of approximately 40 people signed into both meetings, all of whom were asked to submit written comments on the input packets, flip charts, and conceptual plans that were distributed and displayed at the event.

The City hosted the project's final public meeting (Meeting #3) on the evening of June 6, 2018 to solicit ongoing feedback and to gather input on the refinements made to the conceptual plans based on comments received at previous meetings.  Similar to the previous meetings, Meeting #3 was conducted in an open house format where attendees could arrive any time during the event window and have one-on-one discussions with City staff and project consultants at each station.  City staff also invited Sergeant Jason Brown with the Santa Clara County Sheriff's Office to address concerns related to safety, security, and crime history.  A total of approximately 20 people signed into the meeting, all of whom were asked to submit written comments on the flip charts, plans, and questionnaire that were distributed and displayed at the event.

On Tuesday, February 5, 2019, City Council unanimously voted to adopt Resolution No. 19-020, which approved the draft Junipero Serra Trail Feasibility Study dated December 14, 2018.  The draft feasibility study was inadvertently attached to the staff report instead of the January 25, 2019 Final Junipero Serra Trail Feasibility Study.  On Tuesday, May 21, 2019, to resolve the previous mix up in documents, the City Council adopted the January 25, 2019 final document.  An attachment noting differences between the two documents is below.  City staff anticipates including the engineering design and environmental clearance of one or more segments of the Junipero Serra Trail within the FY19/20 Capital Improvement Program budget request, to be presented to Council in June 2019.  At that time, the project will be included within the context of other prioritized capital projects for discussion and potential funding.